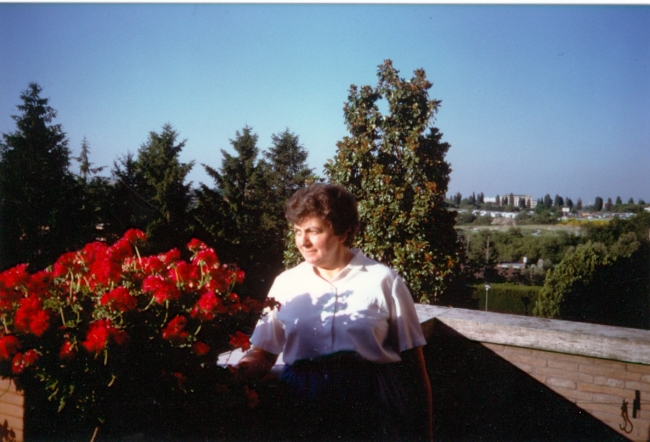 Our beloved sister, Sr. M. Adrien Alíz Pekó moved into the house of our heavenly Father at the dawn of September 23. Beside her head on the pillow lay a novel by a Hungarian author (János Kodolányi: I am). The bookmark marked the story of Jesus and the three chosen disciples setting off to Mount Tabor. If she had turned a page, she would have read about the miracle of transfiguration:

„All three of them were looking at the Master. He shone brightly as crystal. Sounds were buzzing in the air. As if hands from the other world were unravelling invisible silk, or overthrowing thin bottles. Radiance started to speak. The white, the red, the gold, the green, the violet... Colours echoed at the same time from above, from below, from every direction, and the sounds filled the world.

All of them heard it and understood it, although it wasn’t in Hebrew, nor in Aramean or Greek, but as if it was music, it came from within, where there are no words or concepts.

As it is our faith and hope, Sr. Adrien partook in the wonderful meeting with our Heavenly Father, the Eternal Light in its entirety and not only as it is envisioned in the novel.

We look at her life with gratitude, which started on June 30, 1949 in Kiskunfélegyháza, Hungary. The Pekó family lived in Pálmonostor with their six children, close to the shrine of Pálosszentkút. The parents were teachers and their smallest child was Alíz, our Sister Adrien. She learned moral and mental strength as well as patriotism from her parents who were persecuted because of their Christianity in the 1950s and 60s.

In 1967 she was in the final year of the secondary school. She participated in a spiritual retreat when she heard God’s call to consecrated life. Her confessor suggested that she flee the country, but when she heard that there is one women religious congregation in Hungary, i.e. the School Sisters of Notre Dame, she travelled to Budapest with her father to visit the sisters in the Patrona Hungariae Secondary School. Six months later she joined the order.

Her majors were German and Geography at the university, and as a novitiate she spent three months in East-Berlin with the School Sisters to improve her German. She gained confidence in speaking German when she got down on her knees for confession in a church in Berlin, and the priest did not notice that she was a foreigner. She took her temporary profession in 1969 in Debrecen, but her final profession was only 10 years later in 1979, because she was admitted to hospital several times. She even renewed her vows in a hospital in 1975 in the presence of her spiritual leader, the Piarist priest, István Előd. Her health was fragile all her life, but she learned to live with it, not to be a burden for others.

In 1975 she started her school ministry. She was a teacher, also in charge of a class and a prefect in the dormitory. She was enthusiastic and paid individual attention to each of her students. 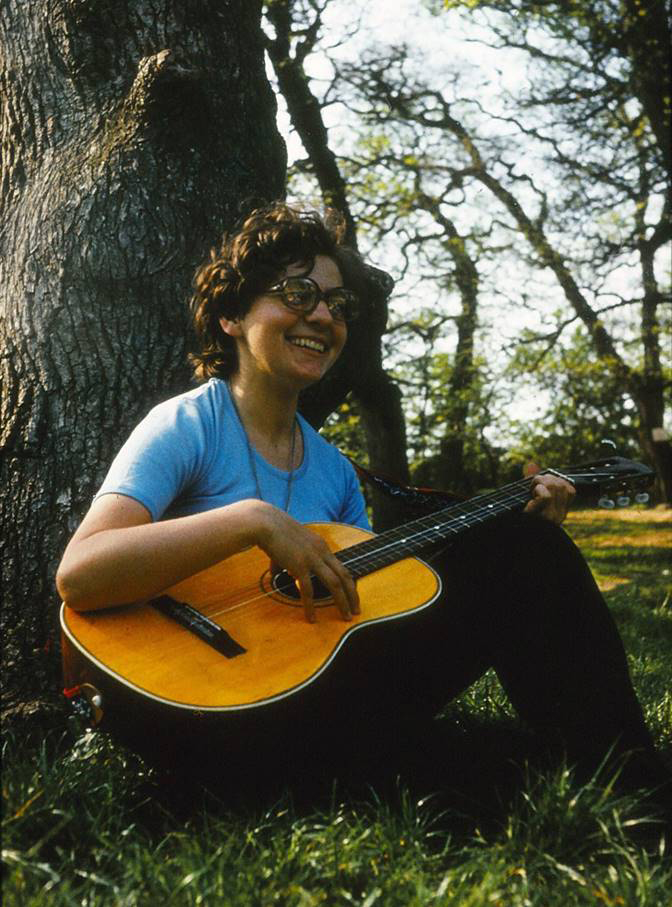 She heard the call to leadership at a young age, and this ministry became part of her life for decades. She served as a deputy director in one of our secondary high schools, as a director in one of our dormitories, as a provincial councillor, a vicar and a house leader. Under the communist regime leaders in church institutions were constantly persecuted by the State Office for Church Affairs, they were afraid to be overheard by someone, and they lived in an era of mistrust. Sr. Adrien bravely coped with the tensions and supported provincial leaders Sr. Relindisz M. Kárpát and Sr. Jolánta M. Szobonya.

In 1987 the General Chapter elected her general counsellor, so she was in Rome when the political changes happened in Hungary. While she was engaged in the international affairs of the congregation, she always kept an eye on the changes going on in Eastern-Europe, especially in Hungary. Gunfire was still heard in Timisoara, when she travelled to Romania with Sr. Patricia Flynn General Superior to call together school sisters who had lived in oppression to restart community life in Timisoara.

From 1992 she served her second term on the General Council as the vicar. Yugoslavia ceased to exist, just like the Yugoslavian Province with some Hungarian sisters living in Voivodina. As a councillor, Sr. Adrien was actively involved in the process of helping 14 sisters who lived in three communities to join the Hungarian Province in 1993.

Sr. Adrien travelled all over the congregation. She visited Africa, Asia, North- and South-America as well as different countries in Europe.

Being a Geography teacher she was pleased to travel to so many different places, and deepened her knowledge. Being a language teacher she quickly learned English, and she even got into Italian as well. She experienced many different life situations, built relationships all over the congregation, which helped her to widen her scope of vision.

She came home from Rome in 1998, when sisters elected her Provincial Leader, which role she served for two consecutive terms until 2005. She enriched the province with her international experience and worldwide vision. She used her network to find supporters to renovate the school buildings which we got back from the state. With her leadership sister communities struggling with wounds caused by communism started to heal. With trust and dare she launched the choir mission in Sovata, Transylvania in 2004, which has been flourishing ever since.

Besides being a Provincial Leader, she accepted other leadership positions as well. She was the elected president of the Hungarian Conference of Major Superiors, and she became a committee member and then co-president of the Union of the European Conferences of Major Superiors. She was open for cooperation, she nourished relationships with several congregations, major superiors of other congregations trusted her and asked for her advice. When her ministry as a provincial leader terminated, she gave us an example in how to let go of a ministry humbly and support the successor.

When she joined the community in Szeged, her main ministry became accompanying spiritual retreats, vocation promotion, personally led spiritual retreats, and supporting Bible study groups. She had her own room in the heart of our Karolina School, which she called the Shelter. She helped teachers, students from the secondary school and the university wholeheartedly.  People from outside, looking for her empathy and words of wisdom turned to her with trust. She took part in the education and spiritual direction of our associates and candidates.

In the winter of 2018 her health status deteriorated quickly, and we brought her from Szeged to Budapest. It was difficult for her to let go. We thought it would be a temporary solution, but after some months she wisely and humbly accepted it as a permanent transfer.  „... it is good for me to be where God leads me. It has always been like this, even when I visited the congregation. No matter where I was, I immediately felt at home among school sisters.” – she said in an interview in the spring of 2019.

Afterwards she gradually gained strengths primarily due to her positive view of life. She was confined to her little room and yet she filled it with her joy of life, admiration for the beauty of flowers and she had an active intellectual and spiritual life. She kept her interest in arts, films and what is going on in the world, and with the help of the internet she followed the news and kept contact with sisters. She was deeply concerned about her siblings and other family members, talked to them on the phone every day, shared in their joys and sorrows. Sisters and nurses entering her room felt that they were there not only to give but also to receive something from her: grateful love, sincere interest, encouraging or comforting words.

With or without an oxygen bottle she participated in community programmes and liturgies with incomparable self-discipline and yet with humour and ease every time her health status allowed her to do so. She was always welcome in the age group meetings held in the mother house, because she created a good atmosphere with her insights, her cheerful personality and care for others.

In the summer of 2020 after the lockdown she was grateful to take part in the three trips for sisters to the Lake Balaton, where she admired the beauty of the landscape and enjoyed the company of sisters. She gained so much strength that she re-opened the Shelter – this time it was her own room – to continue her ministry of spiritual direction and to educate postulants preparing for the novitiate.

Miraculously, the same summer she gave a personally led online spiritual retreat to 26 associates. These meetings were mutually enriching for Sr. Adrien and the participants who were keen to recharge their spiritual batteries after the coronavirus pandemic. It was her last mission.

Her health started to deteriorate at the beginning of September. Her heart and lungs got tired. She did not accept to be taken to a hospital. We could not have accompanied her and be with her because of the pandemic. She wanted to stay in the Shelter which transformed into a chapel every day when Sr. Caritas took the Holy Sacrament, her major source of strength into her room. She wanted to stay at home, where loving and caring hands took good care of her, and where she was part of the community. On her last evening she took the Holy Sacrament in her room and set off to Mount Tabor in her evening reading, where she arrived in eternity. It is good for her to be where God had led her.

An interview with her from 2019

Short video shot in 2019 (she is talking about her ministries).

Details about the funeral:

The mass of thanksgiving and committal service will be celebrated in the Dome of Szeged on Saturday, 24 October, Feast Day of our Congregation at 11 AM.

In regard to the pandemic the mass will be broadcast online. After that, the remains will be put to rest in the Franciscan Cemetery of Szeged-Alsóváros at 12:30. (6725 Szeged, Vasgyár u. 15.) Flowers are welcome either to the Dome or the cemetery.

Csatolmány
Obituary in English
Kapcsolódó
„Where God leads me, there is my place to be” – Interview with Sr. Adrien 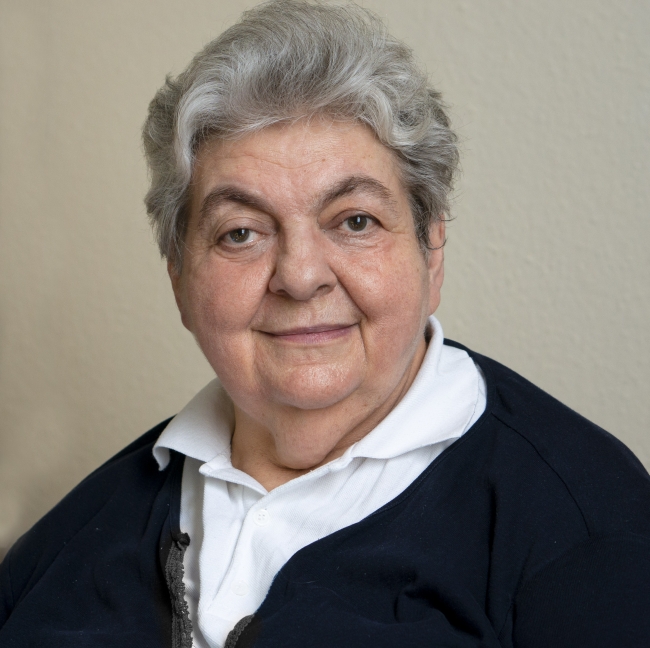 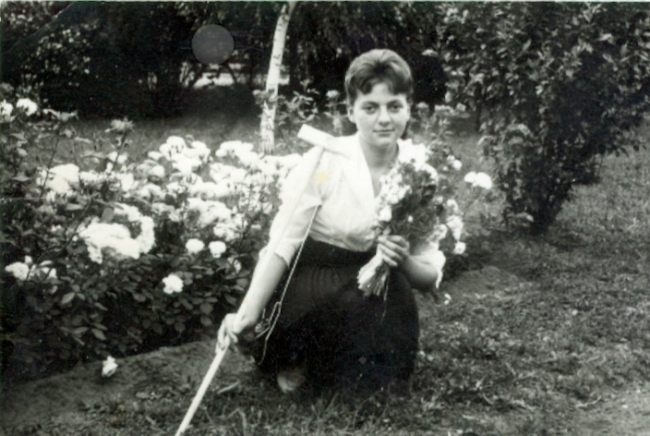 As a young girl 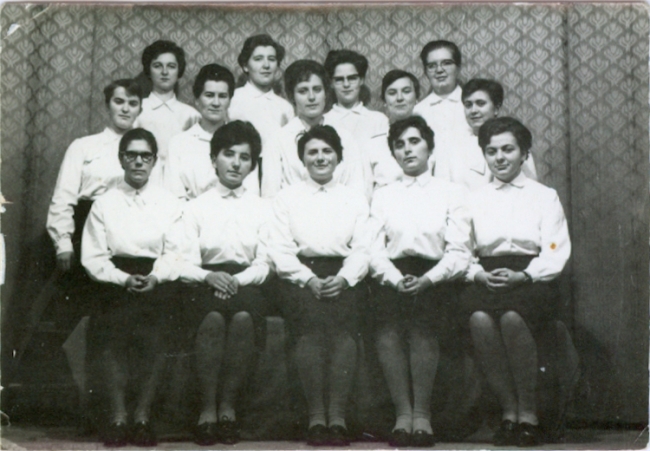 As a postulant (first row, on the right) 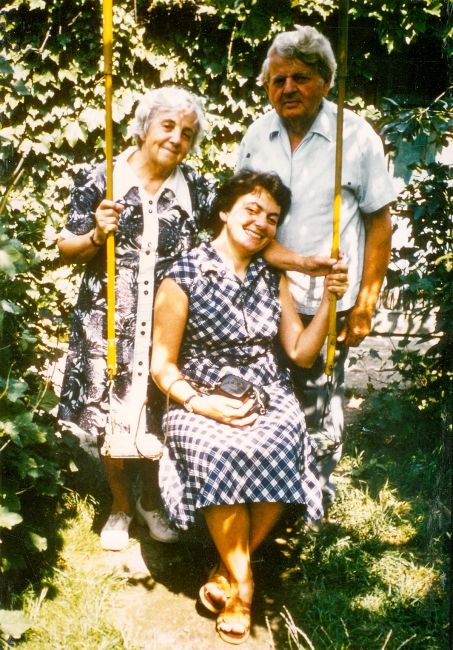 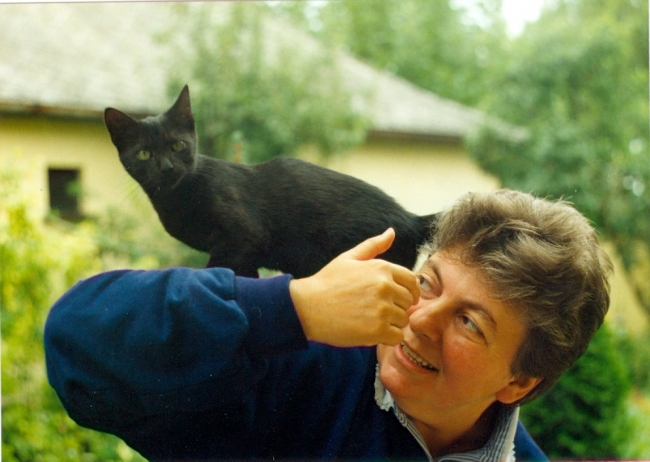 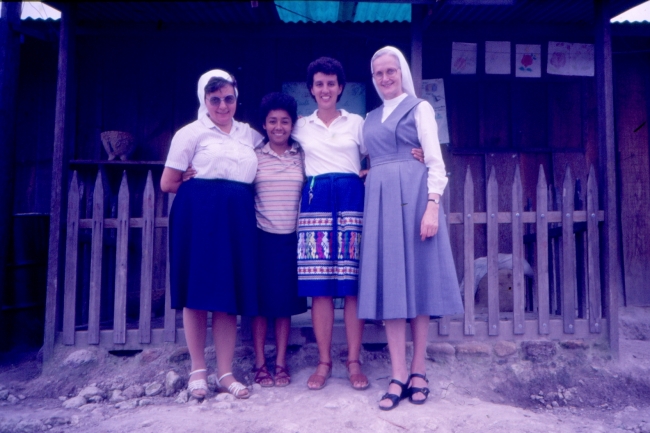 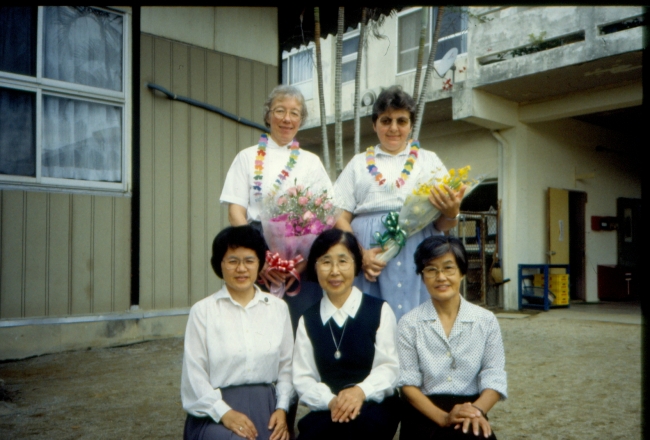 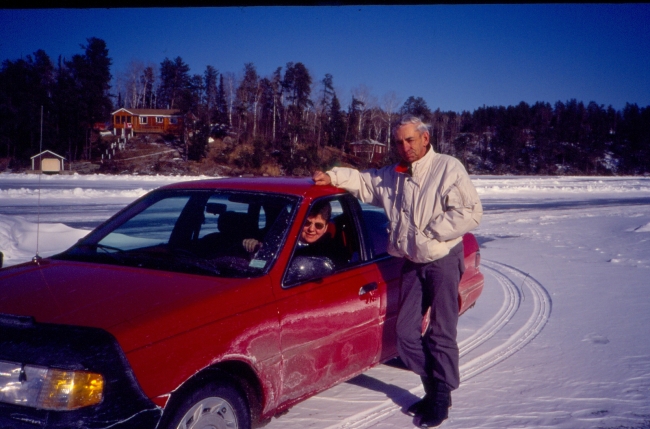 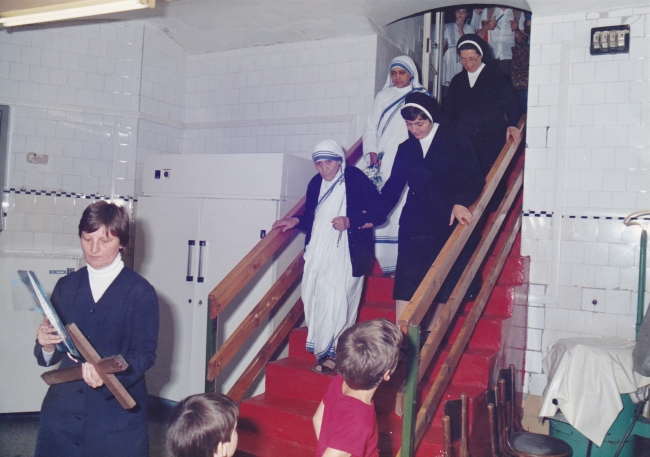 During her first visit to Hungary in 1986, Saint Teresa of Calcutta stayed in our house in Budapest. Here S. Adrien leads her down to the refectory 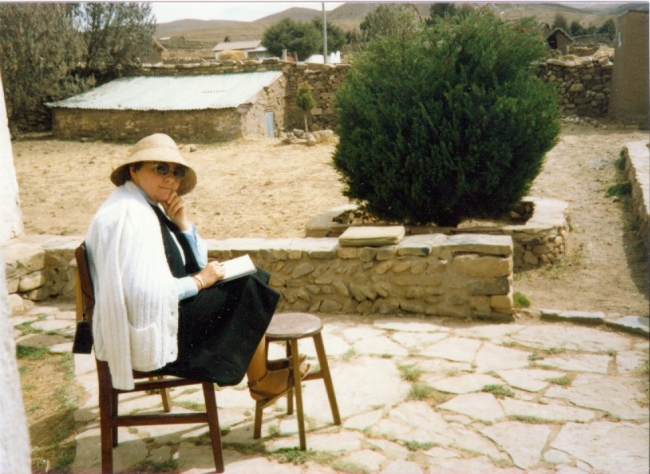 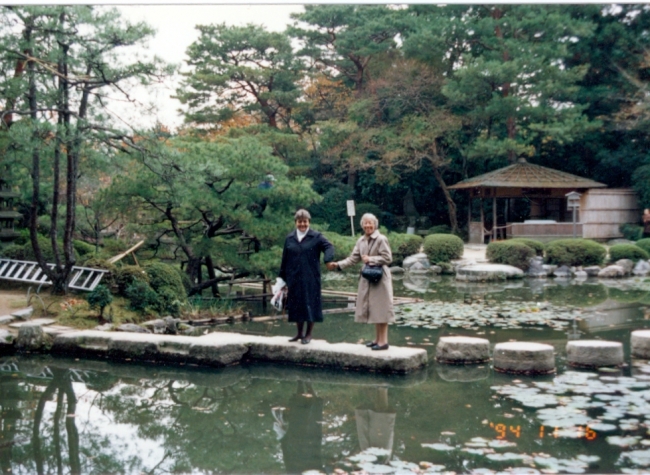 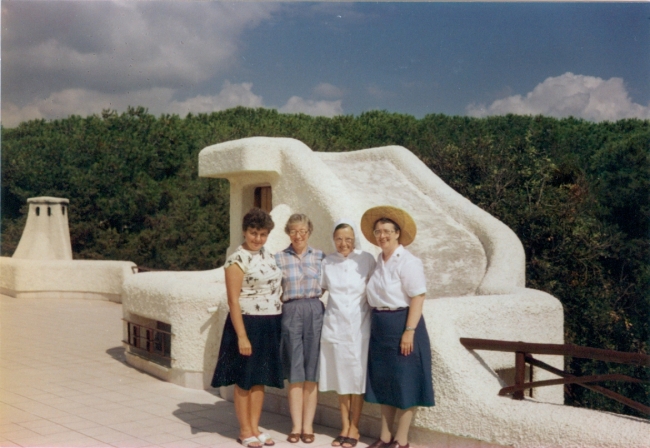 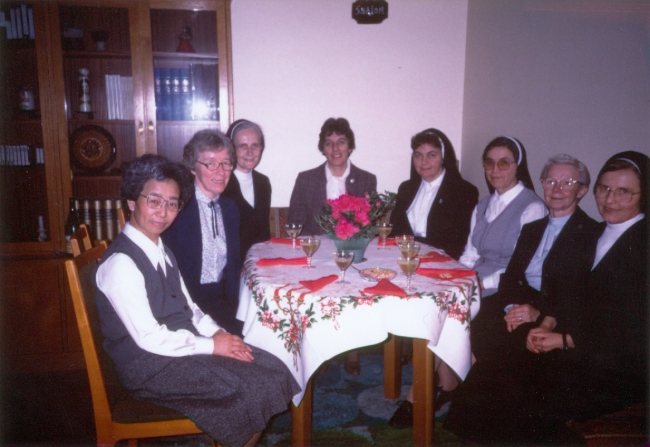 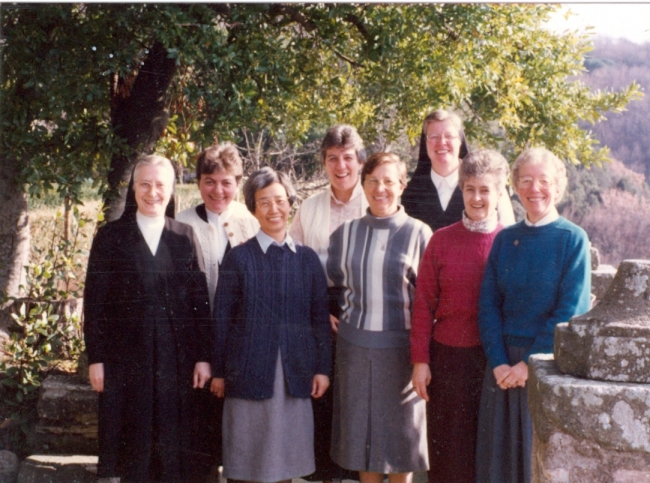 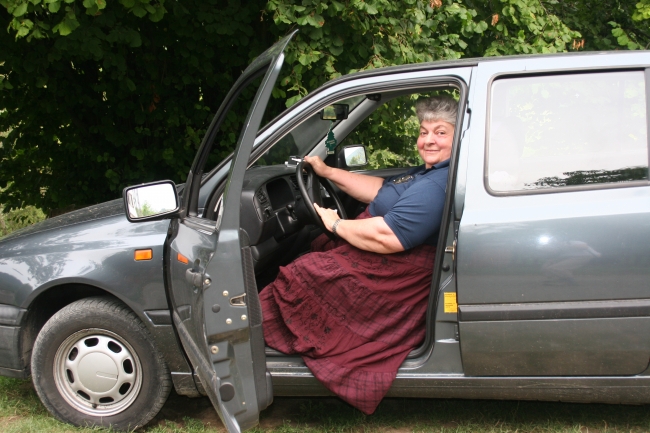 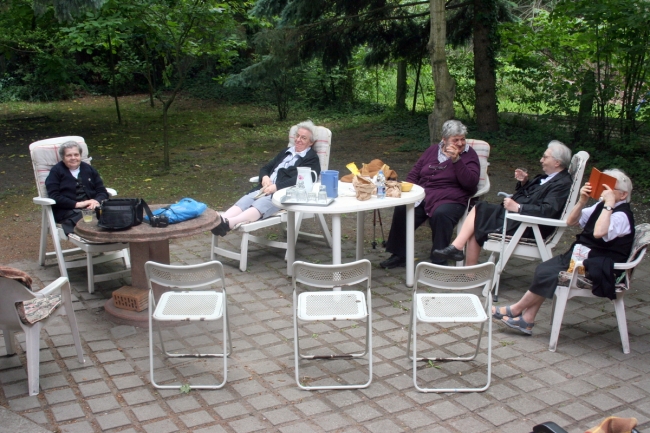 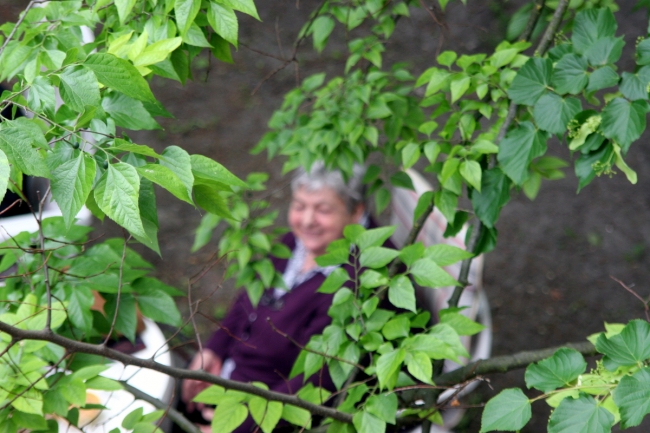 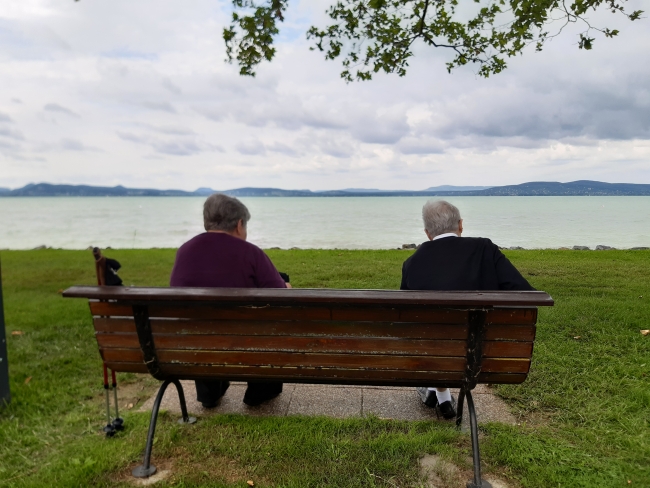