„Where God leads me, there is my place to be” – Interview with Sr. Adrien

Sr. Adrien (M. Adrien (Alíz ) Pekó) has been a sister for 50 years. She was a teacher, a prefect, a deputy principal, provincial and general councillor, provincial leader, and leader of our nursing home for elderly sisters. She lived in Rome, visited the United States, Africa and Japan. She was part of an era which we call a „heroic age” and she was the one who lead the community through the 21st century. 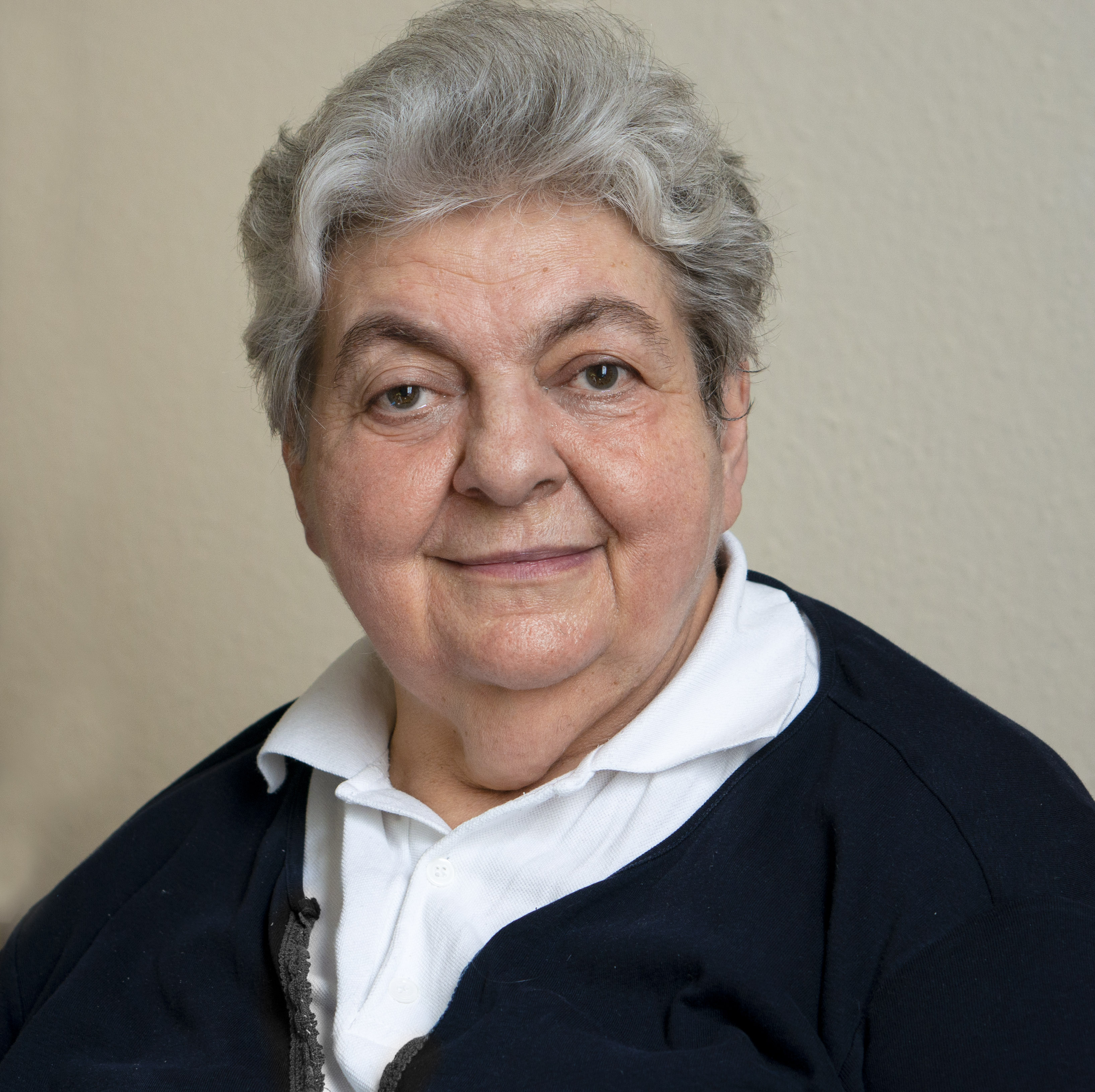 How did your life start?

– I was born in Pálmonostor, Hungary, which is close to Kiskunfélegyháza. The shrine of Pálosszentkút is not far from my small village. My parents were teachers. In the outskirts of my village there is a school building which was built at the beginning of the 20th century. My mother and father had been teaching there for more than 20 years. My father was teaching the senior and my mother the junior section. Elderly people in my village used to call the building the “Pekó school” where my parents educated generations.

The teaching profession seems to be the natural choice with such a family background.

– I was the smallest of six children, five sisters and one brother, but only two of us became teachers. The others chose a profession in healthcare. As a young girl I thought I would either get married and have six children or become a physician and heal the lepered in a mission. I had never thought I would be a teacher because I saw that my parents had far too much administration to do besides teaching. I wanted to heal. Yet, later I realized that a teacher may be a healer as well.

How did you become a teacher and a school sister?

– I was in the final year of my secondary school studies when I participated in a spiritual retreat and heard God’s call to consecrated life. I felt such a power, it was like someone taking a firm hold of you and it wasn’t against my will at all. It was in 1967. Our parish priest suggested that I flee the country, but I felt I had to find my way in Hungary. My confessor promised me that he would inquire about congregations which still existed in communist times. He heard about the Svetits Secondary School and gave me the address of Patrona High School. Me and my mum came to Budapest to visit the sisters in the Patrona Hungariae Secondary School and six months later I joined the order.

Did your parents let you come to Budapest easily?

– My mother did not intervene, although she was concerned. My father worried too much about me, though. I was the youngest child, the apple of his eye. He was persecuted in 1956. During the 1956 revolution the village asked my father to be their leader. He didn’t want any violence. He spoke to the people and calmed them down. „Praise be the Lord” – this is how he greeted enraged people. Later this greeting was regarded a crime. Communist party officials, who he protected from people’s anger, reported him to the state police. Years of struggle followed. My father was fired. He later told me what they had done to him after he was taken away in a huge black car. He never wanted to take revenge and he advised me to do so. But he talked about the persecution of Christians at length. He didn’t want me to be a sister in an atheist system. He was a little bit angry at me. It had taken years until he confessed that I had made a good decision.

How did you become a German-geography teacher?

– I wanted to study biology and geography, but such a combination was not available at the university at that time. The only option was geography and a foreign language. I studied German in high school and I was good at it, so the sisters encouraged me to study German at the university, as they needed a teacher of German in the school. But I have to admit, I hated it. I knew a lot of poems by heart in German, but I couldn’t ask for toothpaste. So the sisters sent me to East-Berlin for three months during my novitiate, where I was together with three German novices. My vocabulary improved a lot and I came to like the language. I made friends with German sisters. Me and the other novices were somewhat naughty and were reprimanded by our wise and understanding novice director, Sr. Anzilla.

– After graduating from the university I became a teacher in charge of a class and a prefect, and I was soon appointed a deputy principal. The real challenge came when I was elected a provincial councillor when Sr. Jolánta (Szobonya Eszter M. Jolánta) was the provincial leader between 1981 and 1989. I felt I was too young and inexperienced for the job. I would not have accepted it, but sisters encouraged me and asked me to do so. The State Office for Church Affairs put constant pressure on us. They wanted to recruit me in the peace movement, in vain. Sr. Jolánta wisely stood up to the communist party. Whenever she was ordered for a meeting, she always took me with her. We trusted each other and we were always there to support each other. This is when I understood this sentence by Jesus: „Be wise as serpents and harmless as doves.”

– These were exciting times. Not only because I came to know sisters personally all over the congregation during our visitations, but because there were major political changes going on in Hungary and in Eastern Europe. The Ceaușescu couple were executed in Rumania in December 1989, and in January 1990 the General Superior and myself travelled to Timisoara, where gunfire was still heard, to visit our sisters who lived in illegality at that time. Our sisters in Rumania and Czechoslovakia had the most difficult times under the communist era. Many of them were tortured and imprisoned. The new reality called for new leadership. As they were scattered, it took us two weeks to travel roads less travelled to find them all. Meeting sisters were staggering and moving. They asked Sr. Relindisz (M. Relindisz Kárpát was the Hungarian provincial leader between 1970 and 1981) who was born in Cluj, Transylvania (Rumania) to be their leader.

You travelled to far away continents as a general councillor …

– I travelled in North-America, Brazil, Argentina, Peru, Bolivia, Kenya, Nigeria, Ghana and Japan. I saw elite schools and extreme poverty as well. Our sisters in South-America served among the poor even then. Once I visited the suburbs in Lima, where women earned a living by sorting garbage to buy food for cooking. They treated us for a meal when we visited them. Once again, I was reminded that very often the poorest are the most generous hosts.

You experienced a totally different world in Japan. How did school sisters get to Japan?

– To understand our history in Japan, we need to go back to 1945 when the US bombed Hiroshima and Nagasaki. Our sisters in the US felt bad about what their government did to civilian people. They were moved by the pain of Japanese people. They decided that they would send five missionary sisters to Japan to help in education. In time, more and more Japanese girls joined the congregation. They were adult converts as Japan is not a Christian country. Many of them had their families turn against them. Our Japanese sisters have a primary school, a secondary school and a college in Kyoto, and they established a mission in Nepal in the 1970s, where they teach 800 children now.

How did you make use of the experience you gained abroad when you came back to Hungary?

– I realized that concepts which are very different from what sisters are accustomed to may only be introduced with utmost care, otherwise the best of intentions may lead to bad outcomes. In addition, when I was a provincial leader between 1997 and 2005, I was faced with a new social and political reality. We couldn’t predict the outcome of our decisions. For example there was a disagreement among sisters whether or not we should reopen some of our former schools. Later on, some of the fears turned out to be legitimate, while others were unreal. Our schools in Szeged and Makó reopened under the leadership of Sr. Jozefina (Bácsai M. Jozefina provincial leader between 1989 – 1997). We established a nursing home in our motherhouse in Budapest. After the South Slavic war our sisters in Bánát returned to the Hungarian Province and we established a dormitory for girls in Nagybecskerek. After returning from Rome I found five communities instead of the previous two. Our choir mission in Sovata, Transylvania was established in 2004 under my leadership. We built a gymnasium in Szeged from foreign subsidies, and we started major renovations. These were hard but productive years. At the same time I became the president of the Hungarian Conference of Major Superiors, and a committee member and then co-president of the Union of the European Conferences of Major Superiors, which brought additional responsibilities, opportunities rich in experiences, challenges and hard work.

This interview is being recorded in the motherhouse in Budapest, but you belong to the Szeged community. What are you engaged in when you are in Szeged?

– I meet with candidates, university students, associates, teachers, students and their parents from our Karolina school as well as lay people from the city: spiritual retreats in daily life, personally led spiritual retreats, vocation promotion, spiritual direction, Bible study groups. I like these tasks. Education and healing, my long time passion are intertwined in them.

– I would love to go back, wherever God leads me, there is my place to be. It has always been like this, even when I visited the congregation. No matter where I was, I immediately felt at home among school sisters.